Howard Tischler, like many baby boomers, took on the unfamiliar role of caring for an aging parent. He helped his mother traverse the difficult late-life transition from retirement to assisted living to long-term care. Along the way, he did his best to honor his mother’s wishes to remain as independent as possible.

An accountant (and Juilliard-trained pianist), Mrs. Tischler retired at age 75 because of failing eyesight. Upon retirement, she established a budget that, while tight, allowed her to cover her expenses and remain independent. While her deteriorating eyesight forced her to give up driving, she delighted in her music collection and love of crossword puzzles.

After taking a trip with his mom to a family graduation a few years after her retirement, Howard and his brothers began to suspect that their mother’s memory and cognitive capabilities were slipping. While spending a few days with her to assess her condition and arrange additional home care services, Howard found a credit card bill for nearly $8,000—unthinkable for a financially savvy accountant on a carefully planned fixed-income budget.

Preying on the Vulnerable

Alarmed, Howard started digging into the credit card charges. What he found was appalling:

Like many seniors, Mrs. Tischler had been taken advantage of by telemarketers and sold inappropriate products. Howard was shocked that large, reputable companies sold these services to his mother. While he was able to cancel the subscriptions, none of the companies were willing to refund the more than one-year’s worth of charges for useless services. Reluctantly, Howard and his brothers paid the credit card balance in full to spare his mother further distress.

Howard never forgot his mother’s exploitation and resolved to do whatever he could to prevent it from happening to others. He researched the topic by talking to many professionals serving seniors, including law enforcement, social workers, medical professionals, geriatric specialists, Adult Protective Services, attorneys and CPAs.

He learned that the problem was far broader than his mother’s experience. Elder financial abuse can take many forms, including petty theft, fraud, scams, misguided home repairs and inappropriate products such as reverse mortgages, annuities and debit cards. He also found out that family members, caregivers, friends, financial professionals and even bank employees were among the perpetrators of this hideous crime.

A successful high-tech entrepreneur, Howard’s experience in the financial services and credit management industries provided him with the unique insight and qualifications needed to develop a technology solution to the elder financial exploitation epidemic. The result is EverSafe: the first technology-based solution designed to stem the varied forms of financial abuse that plague the elderly. 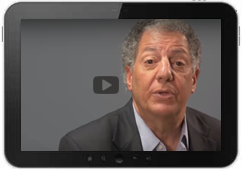 I received alerts on my 85-year-old aunt's checking account. Turned out a new "friend" was forging checks and planning to move her to a nursing home
in another state. Thank you, EverSafe!