Are We Saving Enough for Retirement?

There has been much discussion in recent years about whether the average American is saving enough for retirement. Many still think of Social Security as a mainstay of retirement planning. In reality, the average Social Security benefit for retired workers last year was $1,514 a month, which is only $18,168 a year. Conventional wisdom is that about 15% of gross income should be set

aside, starting in an adult’s mid-20s. This was based on the assumption that consistently investing this amount into a stable account, along with Social Security, would steer folks to a comfortable retirement. But in increasing numbers, experts have warned that younger adults are not saving for older age, and that the government should be doing more to prioritize retirement security. A letter signed by ADP, Edelman Financial Engines, the Employee Benefit Research Institute, Prudential, and other business leaders was sent to the President late last month recommending the creation of a new inter-agency task force “of the top government departments, including the Department of Labor, the Department of the Treasury, the Consumer Financial Protection Bureau, the Securities and Exchange Commission and the White House Gender Policy Council,” to focus on this issue. The correspondence noted: “The proverbial three-legged retirement stool is shakier than ever. Social Security and Medicare face financing shortfalls, while pension plans have largely disappeared for younger workers…” According to Boston College’s Center for Retirement Research, half of households are at risk of not being able to maintain their standard of living in retirement. These are critical considerations for family members focused on advanced planning for their senior years.

New legislation is focused on America’s nearly 50 million family caregivers. It’s called, aptly, the Credit for Caregiving Act. This bi-partisan bill has been introduced in the House and Senate and creates a nonrefundable federal tax credit that would provide

eligible family caregivers who work a 30% credit for qualified expenses they have paid above $2,000. The Act provides up to $5,000 in federal tax credit for these eligible working caregivers – welcome relief for families taking care of these necessary costs out of their own pockets. According to AARP, this credit can be applied to expenses like “home aides, adult day care and respite care as well as home modifications like ramps and smart-home technology that make caregiving at home safer and easier.” A number of national aging organizations have endorsed this Act, recognizing the importance of caregivers, “78 percent of whom use their own money to assist with caring for a loved one, and help ensure that they can continue working,” according to AARP.

Lack of Sleep and Dementia Risk

A new study may concern night owls. It found that sleeping too little in middle age could increase the risk of dementia in later life, according to a New York Times article. The research involved  a large group of subjects: 8,000 adults in their 50s and 60s from Great Britain who were followed for 25 years. It found that “those who consistently reported sleeping six hours or less on an average weeknight were about 30 percent more likely than people who regularly got seven hours sleep (defined as “normal” sleep in the study) to be diagnosed with dementia nearly three decades later.” The study provides compelling evidence for ‘turning in early’ for better cognition as we age.

SENIORS AT RISK AS A RESULT OF MAJOR DATA BREACHES

As we all know, data breaches now seem to be a daily occurrence. Two major breaches hit older adults especially hard. The first involved a website focused on seniors. Researchers from a tech service called WizCase discovered a faulty data server used by a site called SeniorAdvisor, which is “one of the largest senior care and service advisory and reviews sites in the U.S.” Essentially, WizCase’s researchers found that the site’s Amazon S3 (web service utilized by businesses to store consumer data) was left 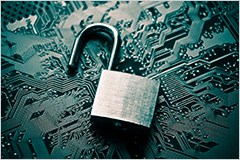 unencrypted. According to a piece by Komando.com, a scammer “…didn’t even need a username or password to access the storage location,“ which contained about 3 million senior citizens’ data that included “names, emails, phone numbers, dates contacted and more.”

A second breach could affect 100 million consumers of any age. According to news reports, hackers claim to have compromised T-Mobile’s consumer database. Reported a few days ago by Motherboard, T-Mobile’s servers were accessed, and a thief is selling the data on “an underground forum for 6 bitcoin, about $280,000. The trove includes not only names, phone numbers, and physical addresses but also more sensitive data like social security numbers, driver’s license information and… unique identifiers tied to each mobile device.” Motherboard confirmed that samples of the data “contained accurate information on T-Mobile customers.” More information on this reported breach can be found in this piece from Wired.com.

*** And remember, at EverSafe we believe in fighting fire with fire. Our fraud prevention technology scours the Dark Web daily so that you and your loved ones can stay ahead of scammers. If you believe you may have been affected by one of these breaches, or you have questions about them, just give us a call at 1-888-575-3837.

Here’s a story that will make you smile, from CBS news. A 99-year-old woman named Mary and a 2-year-old toddler named Benjamin are neighbors. Although they live next door to each other, Mary and Benjamin’s parents rarely saw each other before 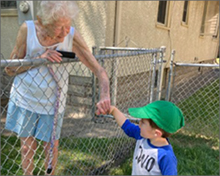 the pandemic. Benjamin was just a baby when COVID hit the community. In the ensuing months, he spent a lot of time outside, learning to walk and talk. Mary would spend time in her front yard, watching Benjamin from the fence between their houses. The two formed an immediate friendship. “He would run over to Mary when he would see her in the yard and he would bring her a ball,” Benjamin’s mother said. “And she created this game that we call Ping Ball, where Benjamin brings her a ball and Mary reaches her cane over our fence, flips it over and kind of kicks it to Benjamin back and forth.” Friends of Mary had been concerned that she would be isolated and lonely without her usual visitors during the pandemic. But a 97-year age difference didn’t get in the way of this new friendship – even during a devastating virus. Enjoy the rest of your summer!