As we are all aware, older adults are at higher risk for contracting the Coronavirus. And although most Americans have been ‘sheltering in place’ over the last few months, the country has evolved with respect to quarantine recommendations in recent weeks. With states beginning to open, many challenges persist for seniors with pre-existing conditions. Older adults who 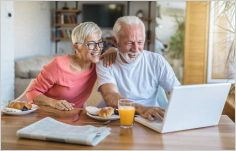 conducted their banking at brick and mortar banks before the pandemic are now considering online and mobile banking. According to Money, “82% of seniors are using online banking more frequently, and 55% are using mobile banking more often” according to a recent study from Zelle. The piece also noted that digital and mobile banking can be both a positive and negative experience for first-time users. The dangers of online fraud schemes and phishing scams can’t be overstated. Educating all consumers who use online banking is important. But the advantages for consumers who transition to banking online are also significant and can outweigh the risks. The Money piece mentions EverSafe as an online tool for family members who wish to keep an eye on each other’s finances and identity. As stated in the piece, although technology may be daunting to seniors who are learning how to bank online, “fighting fire with fire,” or using technology to identify and shut down scammers who operate online, is critical. Digital and mobile banking can be a lifesaver—especially when getting to the bank may not be practical or safe. Many financial institutions are cutting their staff and closing branches, which adds to the convenience of banking from home. The piece also mentions tips for keeping finances safe and secure: monitoring vigilantly, using a team to protect each other, and educating yourself and loved ones about current scams.

One of the newer scams involving seniors is a variation on a theme: offering a free COVID-19 test, in exchange for personal information—including Medicare details. The US Department of Health and Human Services has alerted the public about this

scam, by informing the public that the purported ‘offering’ is “unapproved and illegitimate.” According to a notice from the Office of Inspector General, the personal information which is submitted is used to bill federal health care programs and commit medical identity theft. If Medicare or Medicaid denies the claim for an unapproved test, the beneficiary could be responsible for the cost! To prevent having a loved one or client fall for this scam, remind them to be extremely wary about any COVID-related offers. If health care fraud is suspected, report it immediately online or call 800-HHS-TIPS (800-447-8477).

MAY LOWER ONE’S RISK FOR DEMENTIA

New research suggests that there may be a correlation between getting an annual flu or pneumonia shot and reducing the risk of dementia, such as Alzheimer’s disease. Two studies were highlighted in a MarketWatch piece regarding these important findings. The Alzheimer’s Association International Conference (AAIC) publicized the research earlier this month. One study focused on the flu vaccine and was conducted at McGovern Medical School at the University of Texas using data from health records of approximately 10,000 Americans. The other study was conducted at Duke University. Interesting data points related to these

studies: “those who received their first flu vaccine before age 60 had a stronger protective association than those who got it after 70.” Moreover, “the annual flu vaccinations correlated to a 17% lower prevalence of Alzheimer’s with an additional 13% reduction for patients who continued to receive the vaccination over a period of years.” With respect to the Duke study on a pneumococcal vaccine, if “given between age 65 and 75, there is a reduced risk of developing Alzheimer’s by 25% to 30% after adjusting for sex, race, birth cohort, education and smoking and the connection to genetic risk factors.” More good reasons for seniors to consider getting these shots.

prevention and the administration of new grant activities, as well as protections for residents of long-term care facilities. More details about the history of the Act can be found here. Unfortunately, the Act has received less than 10% of the funding that was originally approved—especially with respect to achieving its main goal of dedicated funding for the agency that serves vulnerable seniors in every state known as Adult Protective Services, or APS. Moreover, some of the more significant provisions of the legislation, including creation of forensic centers that would make a significant difference in investigating and identifying elder abuse, have never been funded. This new legislation, if signed into law, would make a real difference in fulfilling the mission of the Elder Justice Act.

Moderna’s work on a Coronavirus vaccine has become well-known. Based in Cambridge Massachusetts, the biotechnology company recently tested a vaccine on older adults—over the age of 56. The vaccine generated significant immune response in

early-stage clinical trials, and results indicate that the response levels in seniors were similar to those in younger subjects. According to Moderna, “the vaccine produced neutralizing antibodies, which researchers believe are necessary to build immunity to the virus, and T-cells.” This test was a positive sign for health professionals, some of whom had expressed concern because immune systems of elders do not typically respond as strongly to vaccines as those in younger adults. The company said that results from this Phase I trial have not yet been peer-reviewed, but the data has been submitted to a journal for publication.